All linux commands are documented, and their documentation can be accessed using:

Files within a directory can be accessed using:

In Linux, every file or directory has special protections that allow differential access to the different users of the system

The system users are grouped into three sets:

Change the group of the files:

Change the owner (and potentially the group) of the files:

Change the protection of the files:

This command lists the tmp directory which is in the home directory showing also the hidden files with a long output format:

Using visual editor like gedit, vim (or its oldest version vi) or emacs

find <dir> [-opt]: it finds files present in the dir directory and in each subdirectory

pattern can be a regular expression:

it creates a verbose, zipped file. The Documents directory and the file a.txt are compressed in the archive /tmp/file.tgz.

it tests a verbose zipped file, i.e., it tests the archive previously compressed

it extracts a verbose, zipped file, i.e., it extracts in the current directory the archive previously compressed

The focus of this document is on bash

Each shell, when opened, search a configuration script in the home directory and run it

This linking is performed by the operator |

In the following figure the process states and the transitions between them are illustrated: 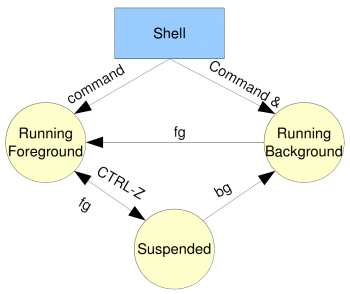 Scripts - Shell commands in a File

It can be executed indirectly:

It can be executed directly:

Example: add to the environment variable PATH the directory /home/user/bin:

If you found any error, or if you want to partecipate to the editing of this wiki, please contact: admin [at] skenz.it

You can reuse, distribute or modify the content of this page, but you must cite in any document (or webpage) this url: https://www.skenz.it/cs/bash_shell
/web/htdocs/www.skenz.it/home/data/pages/cs/bash_shell.txt · Last modified: 2020/11/27 01:10 by zioskenz

Except where otherwise noted, content on this wiki is licensed under the following license: CC Attribution-Share Alike 4.0 International